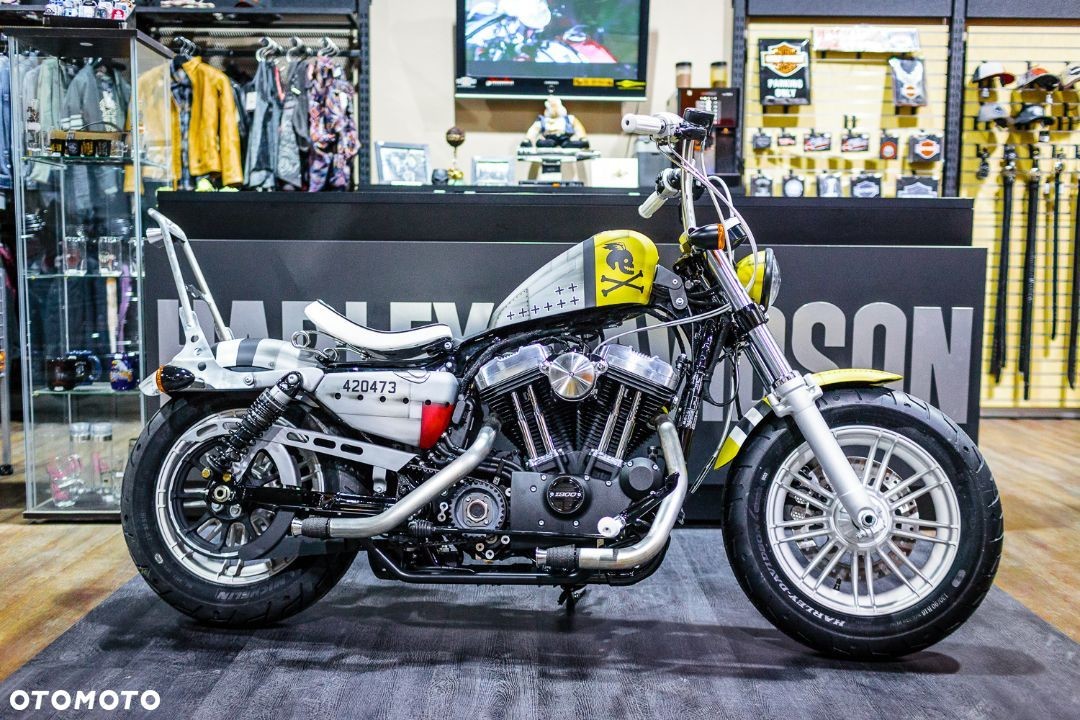 Today, Harley Davidson Łódź has a special offer. It is a Harley Davidson XL1200X Forty Eight hand build for a 2017 Battle Of The Kings competition, which he won in Central Eastern Europe region. Its has been built by our main mechanic and painted by professional colour shop. The main theme is taken from an aircraft which is a P-47 Thunderbolt - # 442 - wyświetl numer - . The plane which this bike is themed on was flown by Commander of 353rd Fighter Squadron in France, Maj. Glenn T. Eagleston. As we can see on the pictures the bike has kept its original structure but some of the parts are moved, hand made or special made. The break, clutch and throttle lines are braided. The exhaust is properly loud and the intake is also beautiful. If you have any questions do not hesitate to contact me.
For Serious buyers the price is negotiable.

BUILD SUMMARY:
Introducing the Harley-Davidson® Sportster® Forty-Eight® Thunderbolt. This custom was
based on Sportster’s most interesting model: Forty-Eight. Both its name (1948) and aesthetics
refer to Bobber type motorcycles.
Components such as switch housings, front suspension, rims, rear mudguard, or drive belt
cover were treated with a slide. It gave them the character of old motorcycles and unveiled
the beauty of raw aluminum. Most of the chrome was worn with a special non-woven fabric
so that their surface became satin. White accessories - grips, footrests and seat springs
emphasize the old-school image.
In order not to spoil the plastic parts, we decided to get rid of the electrical wiring. The wiring
around the fuel tank was designed to be hidden. In addition, most of the electrical installation
was wrapped in cotton insulation, as our grand-parents used. The ignition coil was relocated
on the left side of the engine between the cylinders. Thanks to this, we were able to raise the
fuel tank by one and a half inches and expose the classic shape of the Sportster EVO engine
head. Now the engine is visible on every side - nothing hides it. The choice of a small air filter
was also dictated by this rule. By lowering the rear suspension, the motorcycle body became
more compact and the seat was at the desired height.
The exhaust system is dominated by minimalism, we reduced it as far as possible. The system
is crowned with streamers and a little wrapper. Our work is topped off with airbrush painting,
with a design from the P-47 Thunderbolt.